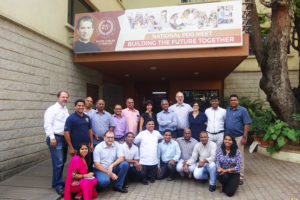 Bangalore, Nov. 26 The National Meeting of the Don Bosco Development Offices of South Asia (PDO Meet) was held at the Don Bosco Provincial House, Bangalore on the 25th and 26th November 2018. The meeting witnessed a participation of 23 members, with representation from 10 PDOs from South Asian network, Economer’s network and the chief representation from Don Bosco Mondo, Bonn and Jugend Eine Welt (JEW), Vienna. The theme of this year’s National Meet was “Convergence for Impact Development”, with primary focus on how to bring about a convergence of PDO network for a nationwide impact.

The meeting was inaugurated by Fr. Mathew Thonikuzhiyil, Provincial- Salesian Province of Bangalore, with the welcome speech. It was followed by the inaugural address by Rev. Fr. Maria Arokiam Kanaga, Regional Councillor for Don Bosco South Asian region. The address, which focused on the meaning and the need for convergence, set the tone for the national meet which witnessed sessions by experienced resource persons as well as in house members of the Don Bosco family. The essentiality of Strategic Planning in Impact Development formed the base of the session by Fr. Paul Moonjely, Executive Director-CARITAS India. Ms. Silvia Cromm, Project Manager-Don Bosco Mondo, spoke about the need to have a consensus on disaster preparedness by the Don Bosco South Asian network as it is only through convergence that a major impact can be delivered, especially during the time of crises. Ms. Aneesha Avrachan, Project Manager-Bosconet and Fr. Noel Maddhichetty- Director Bosconet initiated the discussion among the development network about the need for convergence, through the titular presentation on “Convergence for Impact Development”. The discussion was followed by Focus Group Discussion (FGD) among the network heads. The need to achieve province level convergence and to work closely with the Provincial Council, along with developing Pan India Flagship programs were the key orientations which came out as the result of the FGDs.

Valuable inputs by Fr. Xavier Packiam further drove the need to efficiently maintain the documentation, Due Diligence within each network, while the session on Effective Fundraising by Mr. Reinhard Heiserer, Director-JEW, pushed the need to collectively think and act as one network. In her session, Ms. Devyani Kacker, Legal Officer for South Asia-Thomson Reuters Foundation, highlighted the legal framework required for the smooth functioning of an NGO, and offered her organization’s aid to Don Bosco South Asian network for any kind of legal assistance which would be required.

Input sessions by the foreign delegation from Germany and Austria, focused on the need to focus on projects which were impact oriented rather than project oriented. Mr. Martin Wilde, CEO-Don Bosco Mondo, defining the role of PDO, not just as the project implementing agency but as the think tank of the province and coordinating the developmental activities within the regions. Extensive discussion about changing generation of donors, need to enhance capacities of the PDOs for increased professional reporting and conceptualizing environment friendly and sustainable models of development formed the crux of his session. In continuation to this, Mr. Hans Juergen Doerrich, Head of Corporate Coorperation – Don Bosco Mondo, discussed how essential sharing of best practices among the PDOs was in order to leverage impact on a micro, mezzo and macro level, both on a quantitative but also on a qualitative front. As a conclusion to session on inputs by the foreign dignitaries, Ms. Hannah Siebertz, Head for International Projects in Asia –JEW, motivated the network heads to work together to utilize the untapped potential of Don Bosco South Asian network for creating a nationwide sustainable impact.

Since the national meet was held against the backdrop of the silver jubilee of BREADS- PDO office for the province of Bangalore, it was relevant that the Executive Director, Fr. Joy Nedumparambil, was honored for his dedicated service to the Salesian mission. Fr. Noel Maddichetty, Director-Bosconet, heartily congratulated Fr. Joy and the whole team and wished them the best for the coming years, along with thanking them for the meticulous arrangements for the National PDO Meet. The meeting ended on the 26th November with a brainstorming session on the possible levels of convergence and the challenges posed. A consensus was reached on presenting the deliberations of the meeting to the Provincial Commission before the SPCSA meeting at the end of February 2019

The fourth Formation Seminar was held in Cochabamba, Bolivia, from 21 to 25 October, as part of the ...
Read more...